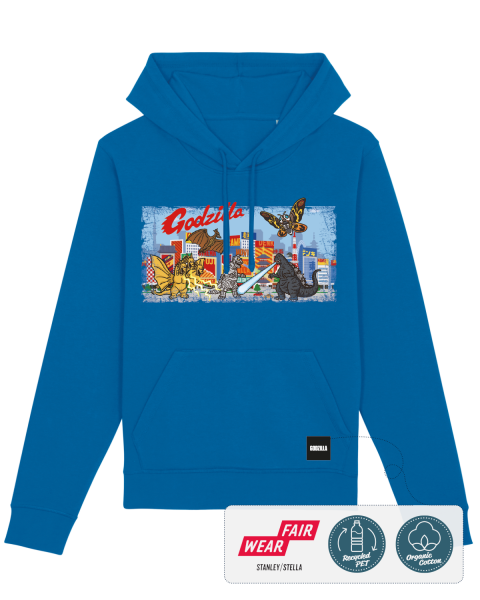 Sustainable premium hoodie from the Japanese pop culture classic Godzilla. It shows Mechagodzilla, King Ghidorah, Mothra, Rodan and Godzilla battling it out in Japan and features a Godzilla label above the seam.

Durable premium hoodie made of 85% cotton (100% GOTS certified organic cotton) and 15% recycled polyester which provides an exceptionally high wearing comfort and promises an impressive durability due to the strong basis weight of 280g/m² of the raw material used. It features a double layered hood in self fabric and round drawcords in matching body color, as well as metal tipping and eyelets to prevent fraying and tears. The fine twin needle topstitches on the armhole, sleeve hem and bottom hem ensure an optimal fit and thus provide a fashionable cut compared to conventionally produced hoodies.

Made from 100% GOTS certified organic cotton from India and without the use of chemical substances, this hoodie meets all the standards for compliance with healthy environmental practices on this planet. Thanks to a special printing technique, the water used for printing can be reused, reducing the overall consumption of groundwater in the production of the hoodie by 91%, thus saving valuable resources. 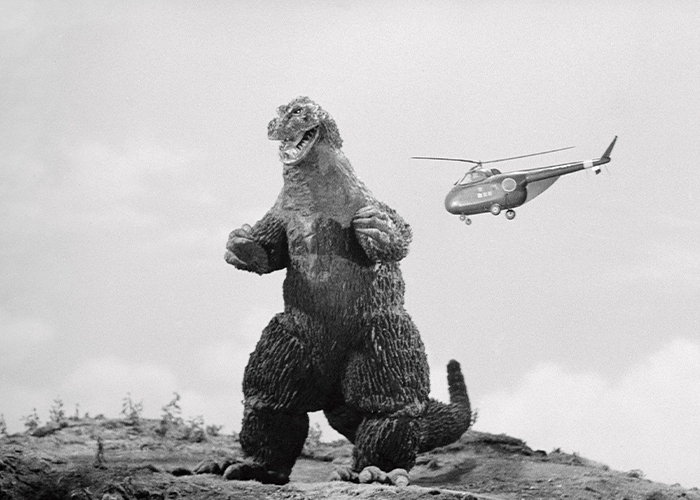 Godzilla is not only representative for a whole Japanese genre of films and television, but also the longestrunning film franchise in movie history. The franchise mostly depicts the same-named monster as a radioactive dinosaur attacking Tokyo and other major cities, as well as other known monsters like Mothra, King Ghidorah and Destoroyah.

The first movie, Godzilla, was only released in Japan in 1954 and immediately became an influential classic of the so-called Kaiju genre, which refers to giant monsters attacking cities and battling other monsters. Discover all products About
This website uses cookies, which are necessary for the technical operation of the website and are always set. Other cookies, which increase the usability of this website, serve for direct advertising or simplify interaction with other websites and social networks, will only be used with your consent.
Decline Configure